Multiple paths might exist to reach a specific destination prefix and all the paths, either best or non best, are kept in the BGP table. As paths for the destination prefix/network are evaluated using BGP Best Path Selection Process, those determined not to be the best path are eliminated from the selection criteria but kept in the BGP table in case the best path becomes inaccessible. The best routes are used to form the routing table. BGP chooses only a single best path to reach a specific destination.

BGP is not designed to perform load balancing and the paths are chosen because of policy, not based on bandwidth. The BGP selection process eliminates any multiple paths until a single best path is left.
Before jumping to the BGP Best Path Selection Method, it is mandatory that next-hop for a particular destination should be reachable. Else, BGP will ignore the path in the calculation.
The following are the rules of the BGP Best Path Selection Criteria.
BGP Attributes play an important role in how BGP selects the best path. An administrator can also manipulate the default values of various BGP Attributes to influence the best path as per the network requirements.
1. Prefer the route with the highest weight. (Recall that the weight is Cisco proprietary and is local to the router only.)
2. If multiple routes have the same weight, prefer the route with the highest local preference. (Just to remind that the Local Preference is used within an AS.)
3. If multiple routes have the same local preference, prefer the route that was originated by the local router. (A locally originated route has a next hop of 0.0.0.0 in the BGP table.)
4. If none of the routes were originated by the local router, prefer the route with the shortest AS-path.
5. If the AS-path length is the same, prefer the lowest-origin code (IGP < EGP < incomplete).
6. If all origin codes are the same, prefer the path with the lowest MED.
We must remember that the MED comparison is done only if the neighboring AS is the same for all routes considered, unless the bgp always-compare-med router configuration command is enabled.
Kindly also note that the most recent Internet Engineering Task Force (IETF) decision about BGP MED assigns a value of infinity to a missing MED, making a route lacking the MED variable the least preferred. The default behavior of BGP routers running Cisco IOS Software is to treat routes without the MED attribute as having a MED of 0, making a route lacking the MED variable the most preferred. To configure the router to conform to the IETF standard, use the bgp bestpath med missing-as-worst router configuration command.
7. If the routes have the same MED, prefer external paths (EBGP - 20 AD) over internal paths (IBGP 200).
8. If BGP synchronization is disabled and only internal paths remain, prefer the path through the closest IGP neighbor. This means that the router prefers the shortest internal path(via IGP) within the AS to reach the destination (the shortest path to the BGP next-hop).
9. For the EBGP paths, select the oldest route, to minimize the effect of routes going up and down (flapping).
10. Prefer the route with the lowest neighbor BGP router ID value.
11. If the BGP Router IDs are the same, prefer the route with the lowest neighbor IP address. 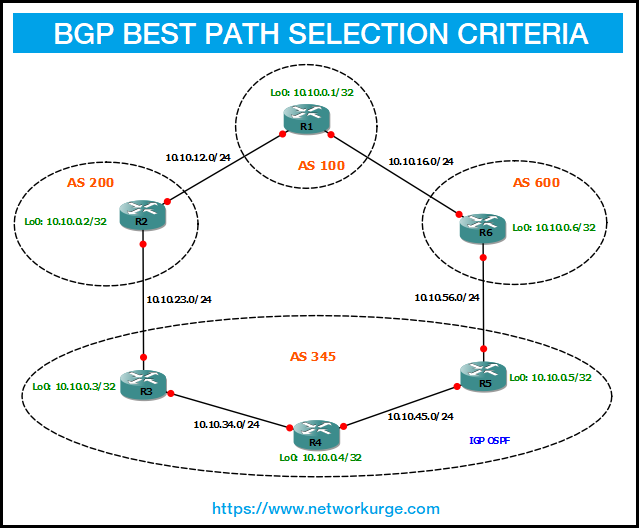 Therefore, we need to move to Rule 9 to check for a tiebreaker.
Rule 9 says, if the paths are eBGP, prefer the oldest route, which is again not the case here because the route is learned via iBGP peers and we have to move to Rule 10.
Rule 10 says, prefer the path from the neighbor that has the lowest BGP Router-ID(RID) value. Here, Router R3 has the lowest Router ID (10.10.0.3) compared to the RID of R5 (10.10.0.5). So we got the tiebreaker here in Rule 10. R4 will prefer to reach R1's loopback 10.10.0.1/32 via R3 because it has the lowest RID value compared to the RID value of the iBGP neighbor R5.

I hope you have found this article informative and useful and now have a fair understanding of BGP Best Path Selection Criteria and BGP Attributes. For any of the related queries or feedback, kindly write to us at networkurge@gmail.com